How to solve the Dartmoor murder mystery in Hitman 3 — Means, Motive And Opportunity Mission Story

The nastiest murders happen at Thornbridge Manor, and as Agent 47 you have the chance to solve it in Hitman 3. Solving this murder mystery with the mission story of means, motives, and opportunities can actually give you the chance to commit your own murder – plus, it’s just a fun thing to do that’s unique to the series.

Alexa Carlyle, your target, hired private investigator Phineas Whitmer to investigate the death of her brother, Zachary Carlyle. In classic Hitman fashion, you want to take out Whitmer and remove his disguise; this will give you easy access to the mansion. It will be difficult to catch up with Whitmer on the way to the mansion, as there are many witnesses outside. So it’s best to sneak in and wait until he’s alone, after talking to the family butler, Mr. Fernsby.

After playing the role of Phineas Whitmer, Fernsby and Alexa Carlisle will meet you at the entrance to the manor and give you a briefing. Then you can contact Fernsby and tell him you’re ready to start the investigation.

Fernsby leads you to Zachary’s room, where his body is still in his bed. Inside are six clues, but only the discovery of some of them will advance the story of the mission. The most obvious is Zachary’s body, which you scan with your camera; 47 conclude that Zachary died from the poison at 10pm the night before.

Look around the room and find Zachary’s suicide note (probably fake), Zachary’s notebook, the glass and bottle of whiskey, and a map of the mansion. Walking to the left of the room’s entrance, look at the shelf – use Instinct and you’ll see one of the books marked. By pulling on it, the sliding door opens the chamber of horror with a peephole. 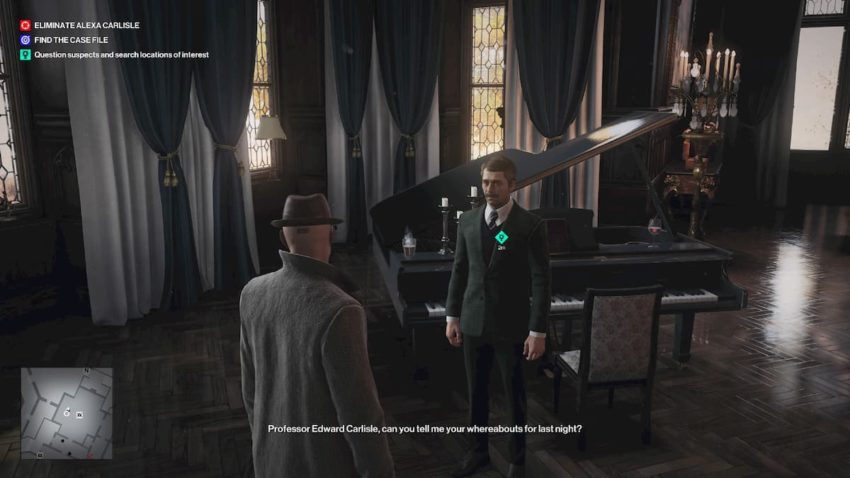 Before looking for stronger evidence, it’s best to interview all the family members who attended Alexa’s fake funeral. Mr. Fernsby will give you a list of suspects and tell you that he has no alibi himself. Go down to the first floor (level 0 on the map) and head northeast to the dining room. There, next to the piano, you’ll find Alexa’s youngest son, Edward Carlisle. Ask him for an alibi, find out Zachariah, and then ask him if he saw anything unusual; they will all be consistent clues.

Do the same with their oldest son Gregory Carlisle, his wife Emma Carlisle and their youngest child Rebecca Carlisle in the living room. Finally, meet Gregory and Emma’s son, Patrick Carlisle, in the trophy room. Edwards’ and Gregory’s alibis match, so you’ll see a confirmed alibi announcement in the Information and Suspects menu that excludes them. You have to dig a little deeper to see if everyone is doing it.

Classes throughout the field 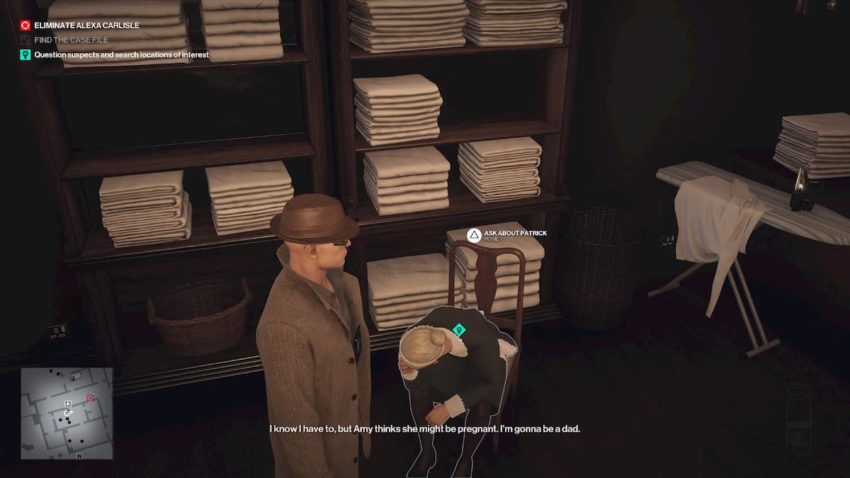 To investigate Patrick’s alibi, go to the staff room on the southeast side of the estate. Patrick’s story is that he spent time alone with an employee named Rosie the night before; you’ll notice she’s sitting on a chair, distraught. You can interview them and confirm Patrick’s story.

It may be difficult for the other suspects to get into their rooms without a key. They had to go to Rebecca, Gregory and Emma’s room on the second floor, to Mr Fernsby’s office on the first floor, next to the staff room, and then to the greenhouse on the north side of the property. You can enter all these rooms with a crowbar – we found one outside the mansion with some of the staff.

In the southeast corner of the second floor (level 1) is Rebecca’s room. There are two servants around; if you come in with a crowbar, make sure they talk in the hallway and don’t pay attention to you; the maid occasionally comes to Rebecca’s door. There will be two clues in his room: Rebecca’s notebook, which contains handwriting that doesn’t match Zachary’s forged suicide note, and Rebecca’s notebook, which proves her alibi. 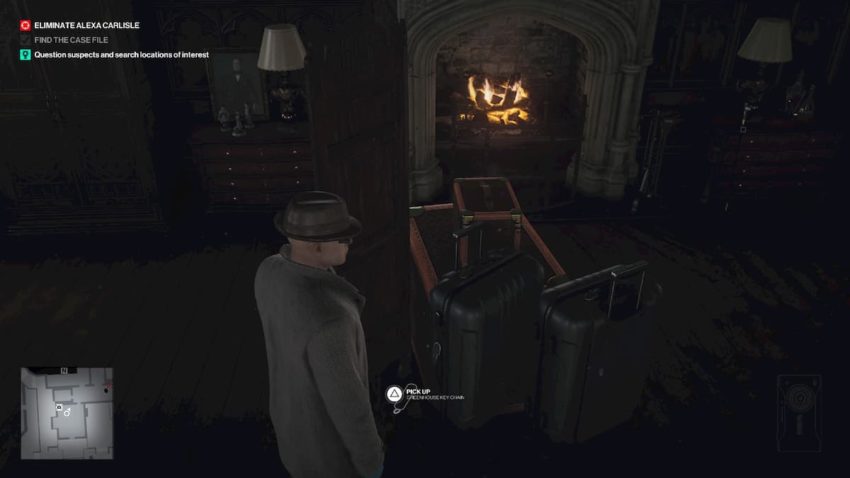 In the northwest corner of the first floor you will find Emma and Gregory’s room; if you don’t want to sneak in, you can sneak out, walk along the ledges and enter this room through the balcony. Here are some key clues: a set of keys to the greenhouse, shoes and tracks, a bulldog stick, and a letter from Emma’s mother that reveals a surprising twist in the plot. 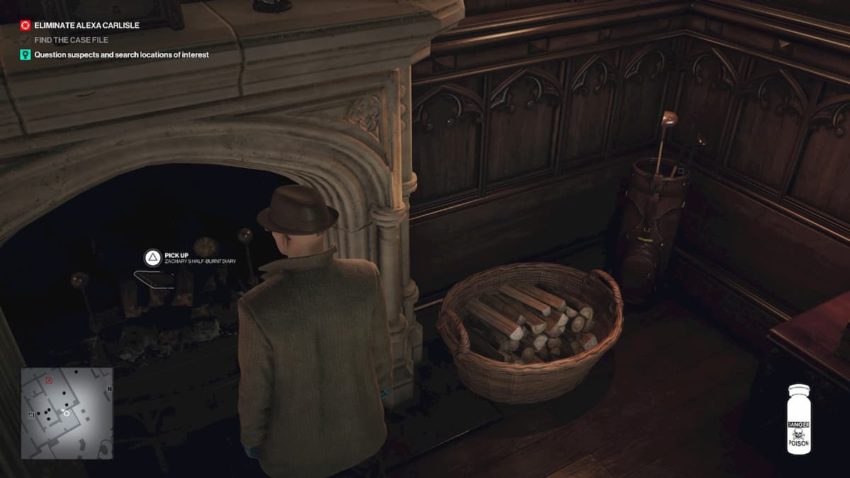 Go back to the southeast corner; as mentioned, the butler’s office is near the staff room. Without a key, use a crowbar to break in. It’s a small office, so it doesn’t take long to find three clues about the killer. One of them is Mr. Fernsby’s pills, which may work as poison, but not the one that killed Zachary. Next, Mr. Fernsby’s List, and finally you will find Zachary’s half-burned newspaper on the fireplace. 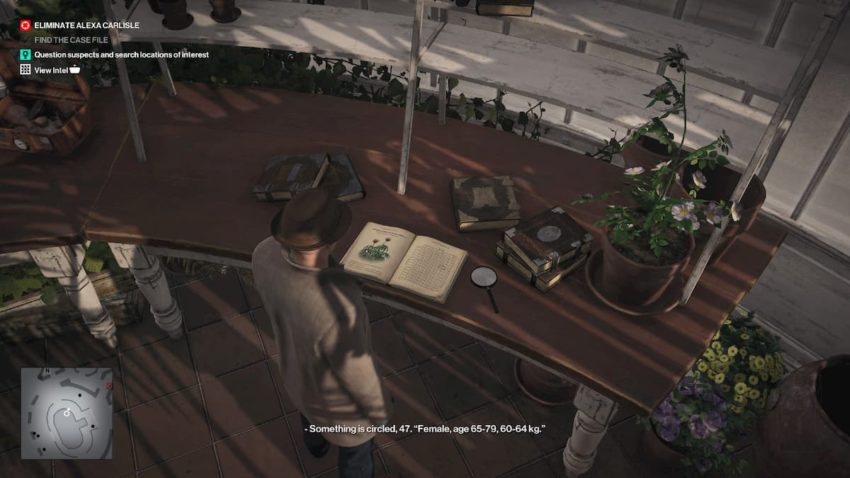 Using the greenhouse key ring, go to the greenhouse behind the property. If you push your way in with a crowbar, make sure security and staff are not watching you. Look for lab equipment that resembles the birthplace of a poison, and a poison dosage table that is fairly resistant to moisture. 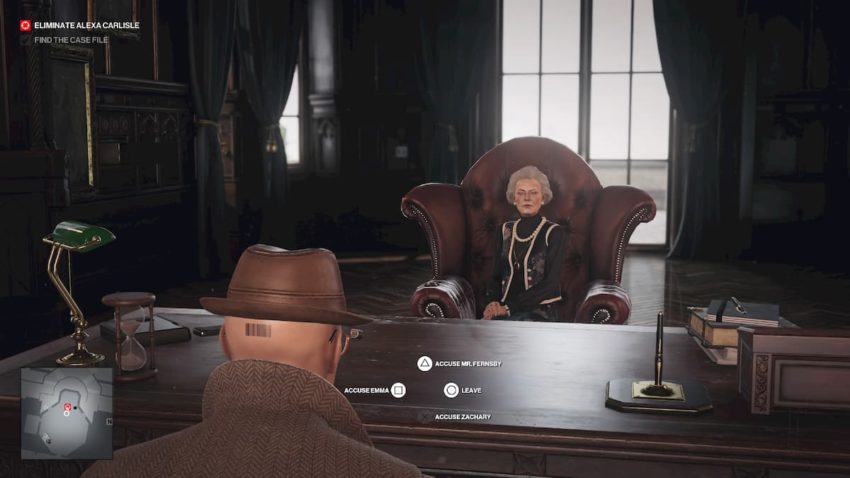 With all that information on your side, go back to Mr. Fernsby at the entrance. Tell him you’ve made your decision and you’re ready to talk to Alexa Carlisle. He takes you to her office, and she just asks for a vodunnit.

From that point on, the choice is yours. If you exclude Zachary from questioning all the suspects, there’s little chance of you framing him. You can also point the finger at Emma, the most likely suspect, or you can use the evidence you found in Mr. Fernsby and make her your scapegoat.

Anyway, Carlisle will ask you what you want as a reward. If you have not yet received the locker file, you can ask them to do so as payment. If not, you can tell him to bill you. Now that you trust him completely, do what you have to do.

If you're like most people, then you love spending...
Read more
Previous articleHitman 3 Dartmoor Walkthrough Guide – How to Complete All Missions
Next articleHorizon Zero Dawn PC Update 1.10 Patch Notes, Download Size, and Bug Fixes (Jan 2021)