New Maglev Metro Expansion in 6 New Maps is a new map pack for the popular game “Train Fever” that adds six maps to the existing three. Players can now travel from Madrid to Barcelona, Paris, or Munich by train on their newly expanded metro network. 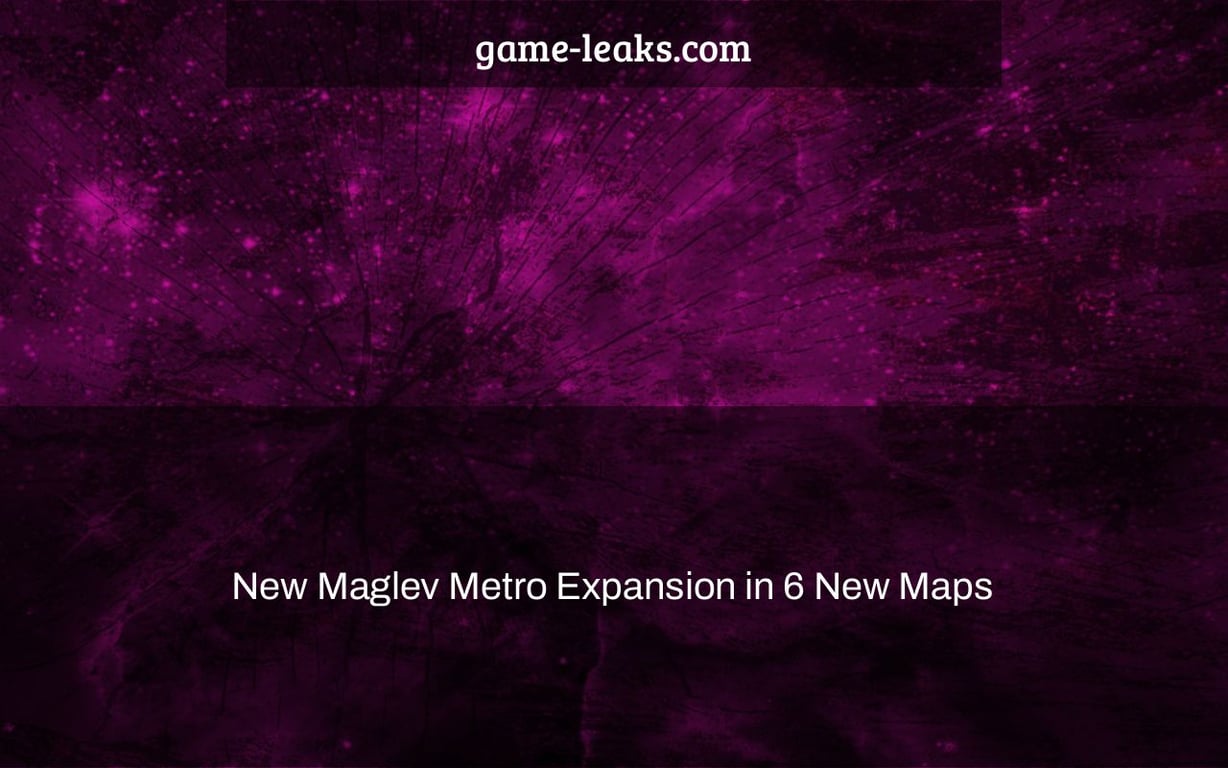 March 3, 2022 – To expand play options of the base game, publisher Bezier announced new Maglev Metro expansion in 6 New Maps. Each of the six new maps announced this year come in thematic pairs: Mechs & Monorails, London & Paris, and Moonbases & Mars, but the rules changes and additions for them are totally unique. In addition to being a different layout and thematic environment, each map also includes at least one extra new physical component that changes up gameplay.

If you’ve played Maglev Metro previously, the modifications to the six new maps are simple, with the rules printed on a single piece of paper. As a result, your time commitment is minimal, yet the experience is completely unique. Those who have played both Berlin and Manhattan (the two maps included in the Maglev Metro base game) know that adding just the Hub in Manhattan changes the game dramatically, allowing players to be more tactical while still maintaining a wide range of strategic options for how the game will play out.

On April 5th, the campaign will launch on Kickstarter. The maps are double-sided and recessed, much like the original Maglev Metro gameboard, and although one expansion may easily fit into the original box, Bezier will offer a storage solution for all six, as well as an unique added bonus (see the Kickstarter page for further information).

ADDITIONS TO THE MAGLEV METRO EXPANSION

The latest Mechs from Mech are triple-sized robots. You start with one that you allocate to one of your action types, and as the game goes, you may unlock another. They not only offer you 4 units for the action they’re in, but they also grant you a unique ability for that action. Putting a Mech in Pick Up, for example, enables you to pick up passengers without it requiring an action, whilst placing a Mech in Adjust allows you to make infinite modifications in one action. With the Hub from Manhattan, all 14 original stations, plus four additional Mech hubs accessible to install around the game, Mechs has more station placements than any other map.

VIPs (Very Important Passengers) are added to Monorails, and they may be dropped off at any station and count as the sort of passenger for that station… even if that kind hasn’t been unlocked yet! When you replenish, you’ll be pulling those VIPs from the bag… However, since Monorails is located in an amusement park, you will only be able to refuel at the park’s entrance gates. To add to the realism, your train may ride shotgun with any other train passing through your present station, even if it isn’t your turn.

District Extensions in London, which eliminate the requirement to unlock distinct categories of passengers/stations in favor of unlocking different locations on the map. This single update is simple to understand and implement, yet it results in a whole new approach to play Maglev Metro. You may easily complete the game without unlocking some of the districts and still construct all of the stations and convey all of the people. During Setup, a related rule modification provides each player a lilac and pink commuter (usually, you only receive robots), allowing you to deploy passengers in places you wouldn’t be able to until later in other maps.

Because metro strikes are arranged ahead of time to let travelers know they won’t be accessible on particular days (similar to what occurs in real Paris), Paris contains a strike timetable. However, in the Maglev Metro version, these strikes are much more limited, occurring every few rotations to various stations. You can forecast how these strikes will affect you, and you may choose to disregard them by accepting a strikebreaker token, however doing so will lose you VPs at the conclusion of the game.

Moonbases focuses on the creation of new half-hex moonbases for each player, which are the only places where they can refuel. You’ll only be able to connect to two of these moonbases due to restricted access, all while attempting to connect to vital stations around the moon’s surface. Because of how swiftly you can go on the Moon, the Moon exertions provide you the choice of free reverse and brakes, which you’ll need. Because of the low gravity, your Move action may carry you up to 16 stations for a single unit, and the center station on the moon is a double station made up of two ordinary stations, allowing you to drop off two distinct passenger kinds in a single action.

A completely new addition on Mars enables you to launch your train (and its passengers) to Deimos or Phobos, where Purple and Coral commuters may be dropped off. You may also go backwards on your rails without needing to perform an action to reverse your train thanks to the extension. To add to the fun, you may use your track to circle around Mars from one side of the board to the other.

Utilize cutting-edge magnetic levitation technology to construct a metropolitan train system that transports workers and robots underneath the city in Maglev Metro. Replace the old subway networks in Manhattan and Berlin with newer, quicker, and quieter technology. Improve the capabilities of your train system so that your passengers reach at their destinations first.

In this pick-up-and-deliver, tile-laying, engine-building game, efficiency is vital to success. Transparent tiles enable you to overlap your path with those of your opponents, twisting you from station to station. Your powers are effectively upgraded and adjusted by robots, who use distinct aims to maximize scores. The game board has transformed into a contemporary subway map at the conclusion of the game, with brightly colored lines linking stations all across the city.

Do you think the new Maglev Metro extension in 6 New Maps is exciting? Please let us know in the comments section below!

If you're looking to get into the world of...
Read more

The Power Pack for the Sony PSP is a...
Read more
Previous articlePYMENA PS4 Controller Review
Next article273 in 1 Game Card Cartridge Review

Prodico PS4 Wireless Controller is a great addition to...