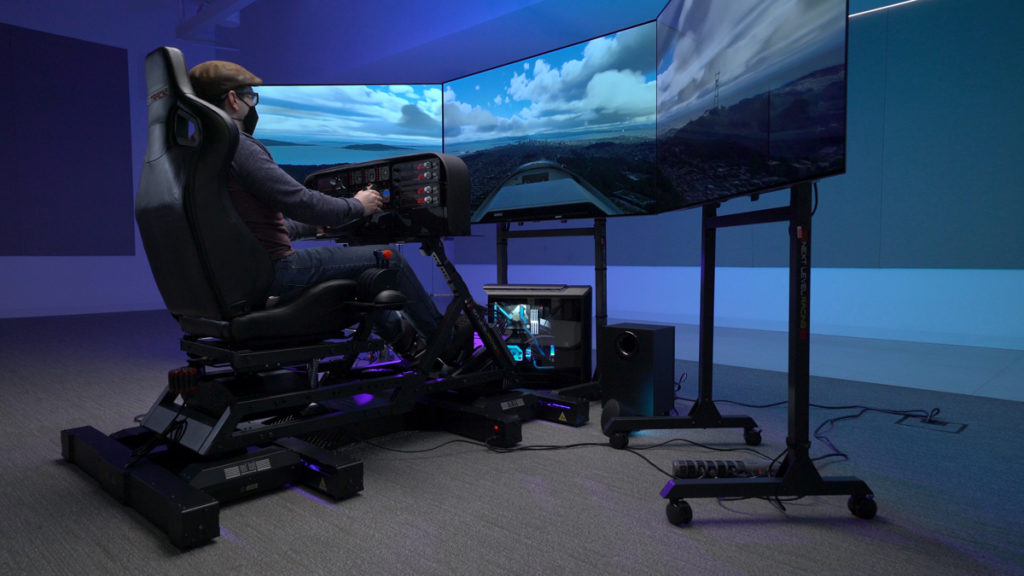 NVIDIA’s GeForce Garage division has spent $20,000 to develop something that will finally let you enjoy the world’s most popular flight simulation game, Microsoft Flight Simulator. As shared by the green team in a new post today on the GeForce blog, Ultimate Flight Sim Rig not only includes a full set of active dashboards and seats, but also three LG CX 65-inch OLED TVs that immerse gamers in a 5760×1080 environment. The heart of the system is a fully water-cooled PC with an NVIDIA GeForce RTX 3080 graphics card.

Just like in a real aircraft, the player features a full cockpit with all instrument panels, connection panels and Logitech displays housed in the Volair Sim Avionics Panel, NVIDIA said. If necessary, the player flips switches to get their plane off the ground and navigates the runways and through the air using panels, screens, and gauges, which improves immersion and presence in the game.

But it’s under the player that the magic happens: Next Level Racing motion platforms tilt your seat in all directions, synchronized with the action of Logitech’s throttle, stick, and wheel. And for force feedback, there’s the ButtKicker, which sends vibrations through the seat in sync with track movements, drag, and unexpected noses.

According to new tests shared by NVIDIA and Digital Foundry, the flagship GeForce RTX 3080 GPU is capable of averaging 64.3 FPS at 4K resolution. Aviation fans who don’t own a GeForce RTX 3080 graphics card or a copy of Microsoft Flight Simulator Premium Deluxe Edition can enter a new contest that requires them to submit a beautiful screenshot using the game’s built-in photo mode.

Assassination Creed Valhalla The first expansion, Wrath of the Druids, comes out on the29. April

If you're like most people, then you love spending...
Read more
Previous articleHow to complete the Ostara Brawl in Assassin’s Creed Valhalla – Ostara Festival
Next articleHero Wars – Best Teams (March 2021) & Team Building Guide