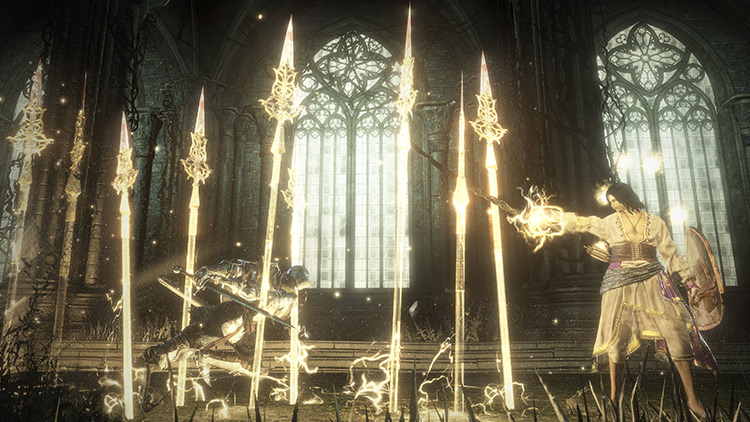 Chef battles are the bread and butter of all Soulsborne games.

It’s the epic and defining encounters that stand out the most in retrospect, providing some of the most demanding challenges the games can offer.

DS3 is no different: it features some of the hardest boss fights of any Dark Souls game, but it’s also a great brownie cocktail.

Today we take a look at the hardest bosses in Dark Souls 3!

Message: Most boss fights can be facilitated by NPCs or human sumons, so we’re judging this ranking on solo fights only.

I’ll get rid of this right away.

Halflight is a very special boss from the Ringed City DLC that is actually a conspiracy. If you challenge him, the boss himself will be another human player!

Therefore, the difficulty varies greatly, as you can take on the PvP god himself or an entire horde.

Half-stealing the boss only happens when the Covenant doesn’t call anyone out, and it’s a pretty easy fight.

That’s why this boss is solid? and he’s the most unpredictable boss in all Soul games. 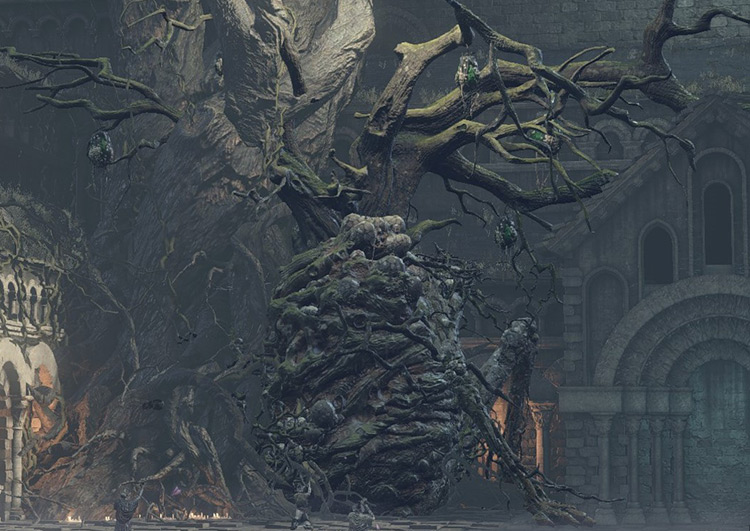 It takes something special to be placed lower than a literal textbook pattern, but the big tree takes it out.

This is the third boss you encounter, and it’s actually optional, but without it you can’t transfer the souls of the bosses into these wonderful unique rewards!

But don’t worry, the fight is ridiculous. It’s an anthropomorphic tree, overweight, with… out of place… wobbly… Bullets… for weak spots.

And to beat him, you hurt your balls….

It goes on and on. 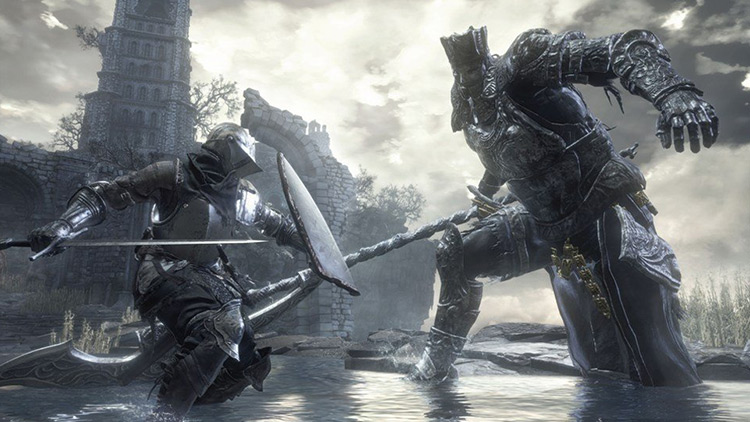 Gandyr is a real challenge in the first part thanks to his long attacking animations and great range.

But unfortunately, once you get the hang of parrying, he’s a real bully on subsequent attempts and can be defeated quite easily without a fight, even as an underclassman.

But he got his revenge! His counterpart, the champion Gandyr, is much tougher, and we’ll see him later. 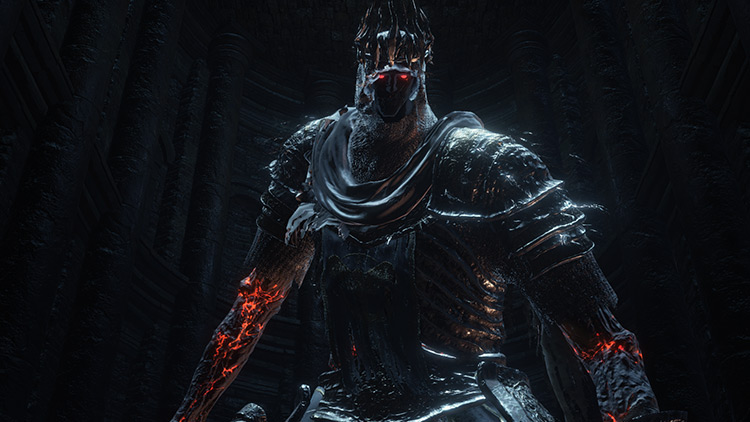 It’s strange for a boss to be on the list this late, but that’s because Yorm is rather strange.

Like the chaos bed of early Dark Souls, Yorm is a cunning final boss and extremely weak against the Storm Leader, a weapon found in his own boss’ arena.

It only takes a few fully loaded shots with one weapon to take him out, and in doing so you can be very far away and put yourself in danger.

If you want to try to fight without the attack rule, that’s a different story, and Horm would at least be in the top five. 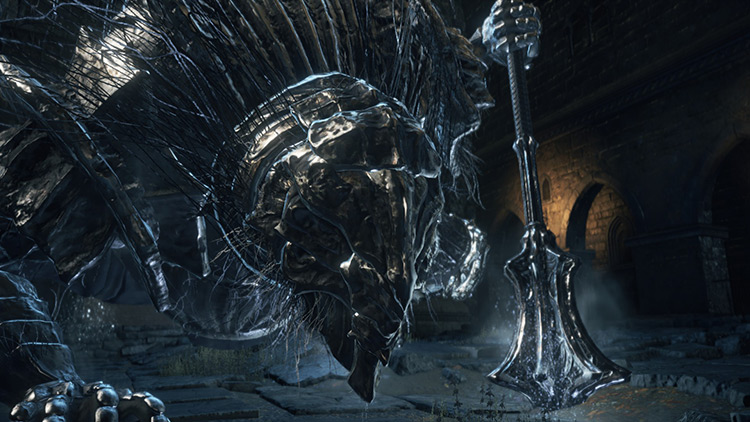 Wardt is the second non-optional pattern you encounter at the end of the wall, so it’s pretty easy.

The general strategy is to kiss his weirdly misshapen ass so you miss 99% of his attacks.

The beginning of phase 2 is a bit different though and requires pretty accurate timing on your rolls to survive.

But otherwise it’s more of the same, and if you survive his attacks, you have a great chance of ending the fight.

15. Guardian of the Abyss 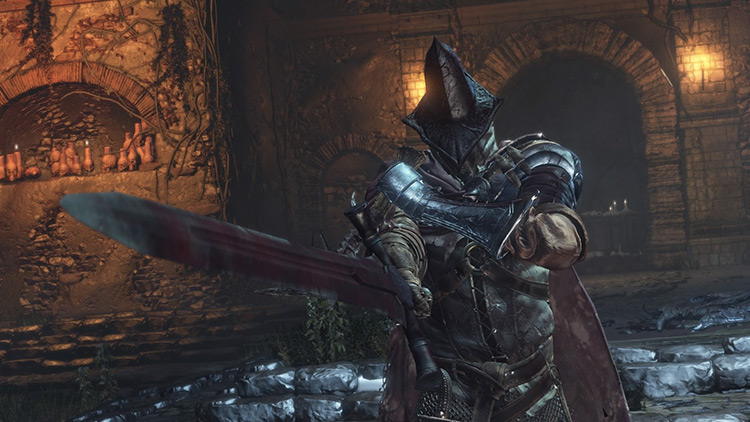 The Guardians of the Abyss are the first Grain Lords you’ll have to deal with, but you seem distracted….

You fight up to three at a time, and it’s interesting to note that they also fight each other!

For Phase 1 fights you just have to sit and wait for a long time, because in most cases the boss will self-destruct by Phase 2.

Phase 2 is a bit more complicated, it’s a one-on-one fight with a lone spectator (rather calm), but it can also be staged behind the scenes, so it’s not that difficult. 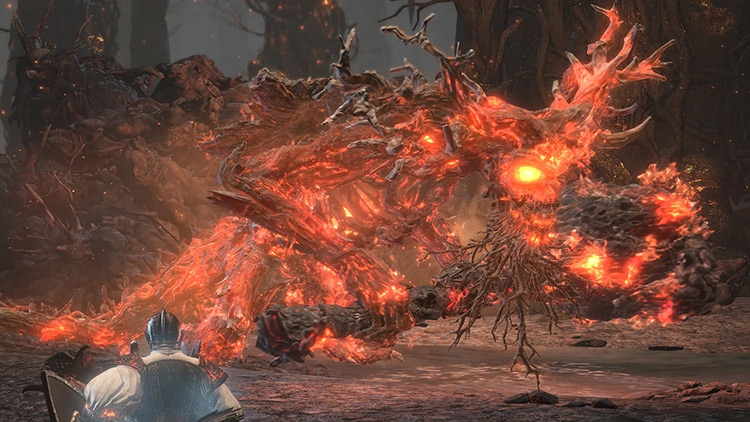 The Demon King is an optional pattern found in a lake of fire.

The Demon King, a survivor from the time of the first Dark Souls, is really old. But that doesn’t make him a pushover – his arson is a fairly light show, and some of his attacks are very punishing.

Most of the time, though, he’s rather slow and clumsy, and has a strange kamikaze attack that can occur at 30% HP or less and, when used, causes him to fall and become completely incapacitated. 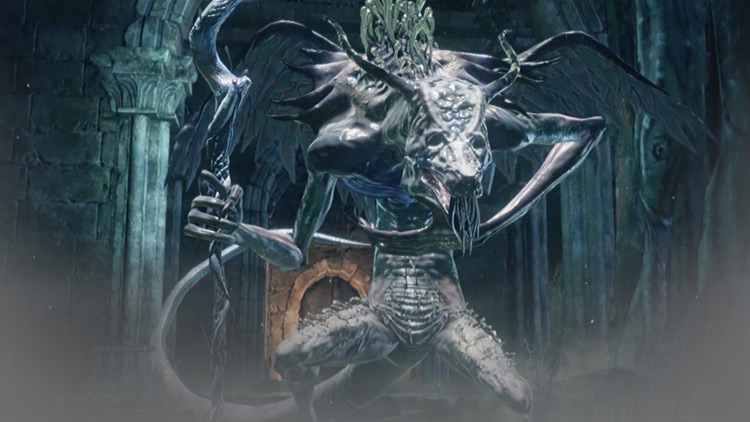 Oseiros was the first boss I fought.

It has very significant damage, and during its wild phase 2, it won’t leave you alone.

He also has a few slime tricks – namely inflicting fleet damage and reducing your FP points – and is extremely resistant to magic, so he casts RIP spells during this fight.

Aside from the combat itself, Oseiros is an extremely interesting character, one of the most enigmatic and noisy final bosses in the entire series. If you love your legend, I recommend you read his theories! 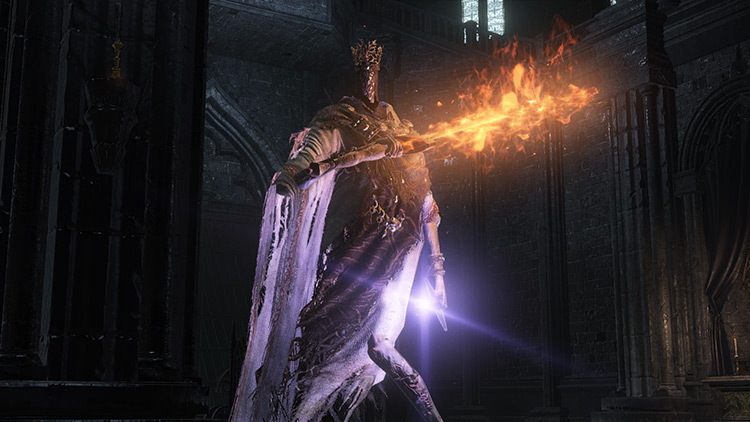 Sullivan is a formidable fighter when he’s alone, and can be a real threat.

The double Pontifex is located in the chapel at the end of Irithil and has incredibly long combos that leave little room to open.

The situation is even worse in the second stage, where he is accompanied by a dark clone who mimics his attacks just before he performs them himself.

This leaves even less room to attack, and it can be very difficult to dodge these relentless attacks. 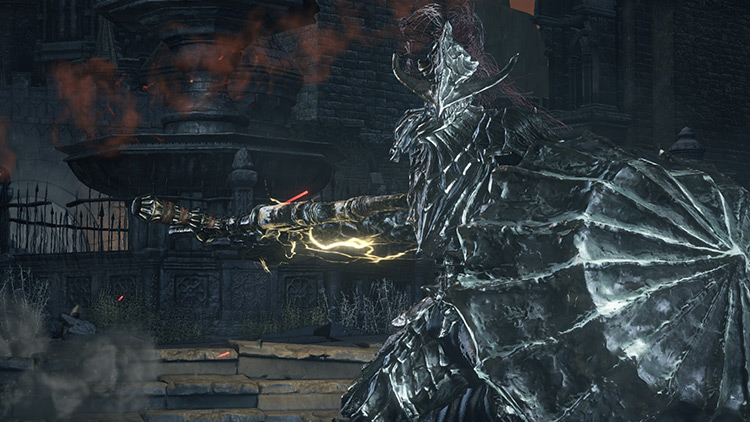 The third oldest boss in the game, possessed by a dragon’s armor, is a brutal and heavy foe, accompanied by mysterious pilgrim butterflies.

The armor itself is pretty simple – the massive attacks do significant damage but are easy to dodge, but when the butterflies show up in phase two, you can be shot at from nowhere.

Armor also returns as a mini-boss during the City of the Ring DLC! And after you beat him, you can gift a large set for yourself (goods not included). 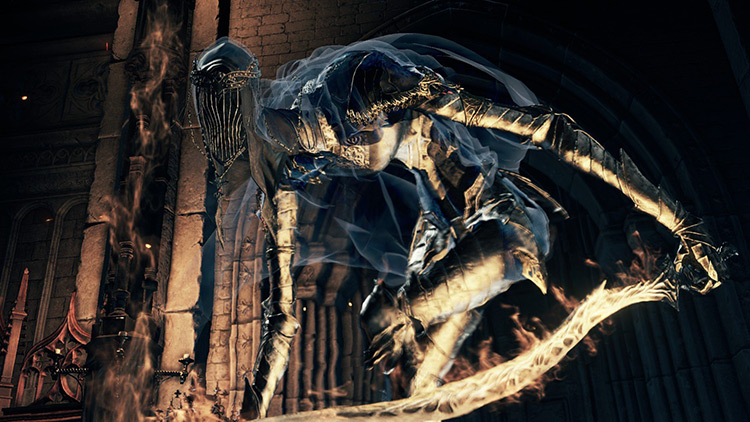 In the middle of our list is a thin, heterosexual dancer.

It’s also an interesting item – to be able to defend yourself in Being! If you have the courage.

This potentially makes them the second boss you’ll have to deal with – although this is not recommended for NG+.

She has an absolutely enormous movement with swings that each do a lot of damage, divided into notch, shot, fire and black, so it’s hard to make a hook against her.

But because it’s so weak against lightning, you can make a cake out of it, and even reward yourself with the soothing wonder of sunlight once it’s defeated! 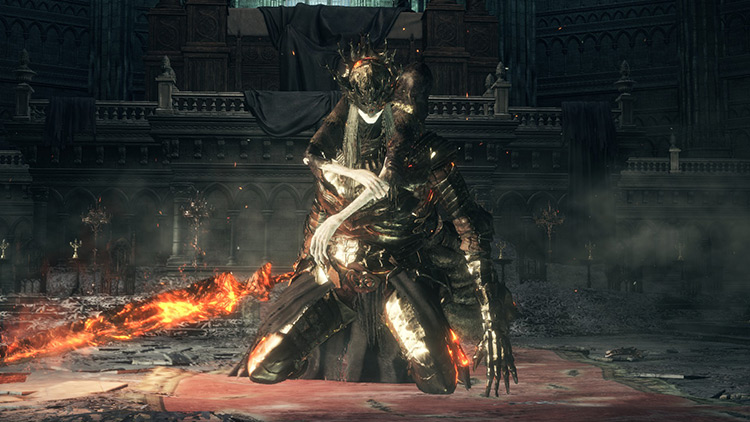 The Pig Brothers are the fourth and last Ash Lord you’ll encounter, and the second-to-last boss of the base game.

The real boss here is the jaded younger brother Lothric, who is strapped to Lorian’s back and constantly reviving his murdered brother.

The fight consists of killing Lorian, getting hit by the Lothric, reliving and rehearsing, but can be quite difficult due to the twins’ ability to teleport while Lorian attacks and performs combos, resulting in violent jumps when his huge sword appears out of nowhere. 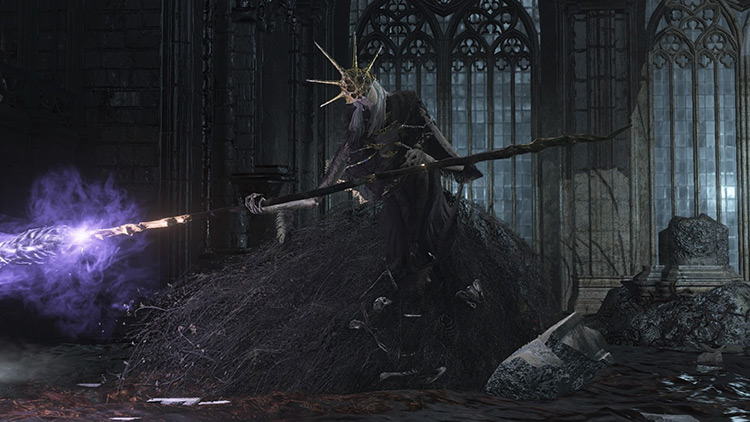 The boss himself, aside from that, it’s not so bad – as long as you’re patient.

But if you see him shooting, you better string up your Knicks, because you’re going to have to run if you want to survive, and nine times out of ten, it’ll be your loss when he inevitably catches up to you.

He has other nasty moves like his fire trail and soul spear, but nothing keeps me up at night like this infernal rain of arrow attacks. This sucks. 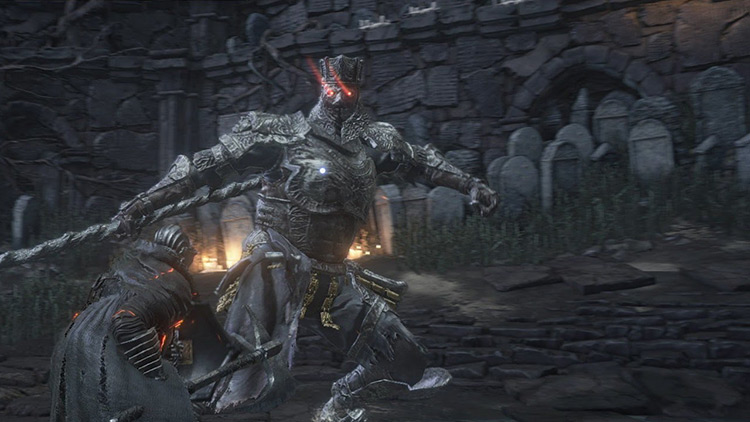 Gandyr is back, and this time he means it.

Unlike Yudex, Champion Gandyr is not a beast of burden, and his incredibly aggressive moves will keep you alert.

He fights like a true gladiator, using his heavy swing and incredible body weight to stun and kick you as he kicks you to the ground.

But, like his counterpart in the textbooks, he may still be married! But beating him with ripostes alone will be no easy task, even for the most adept players. 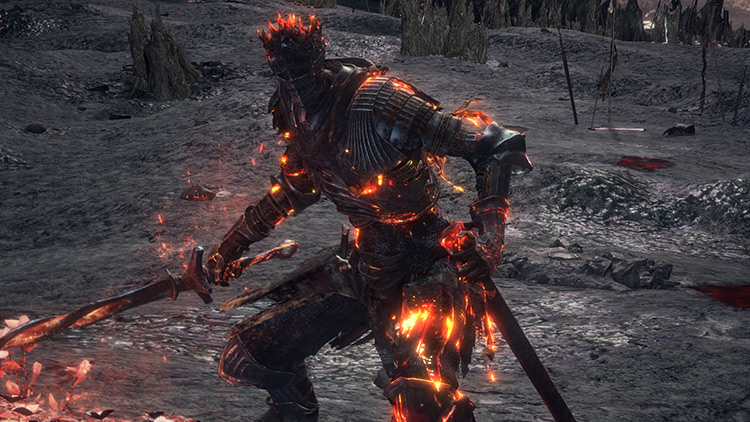 The newest boss in the base game, Soul of Battle, has an incredible variety of moves in a wide range of styles and weapons.

In Phase 1, the soul moves randomly through a movement of sword, spell, spear and scimitar, each with its own challenges.

In the second stage, she embodies the soul of Lord Gwyn himself, using his moves from the first part of Dark Souls and forcing devastating instant combos.

It is this variety that makes the pattern so difficult, because one attempt can be completely different from another.

But then again, you don’t expect the final boss to be that easy, do you? 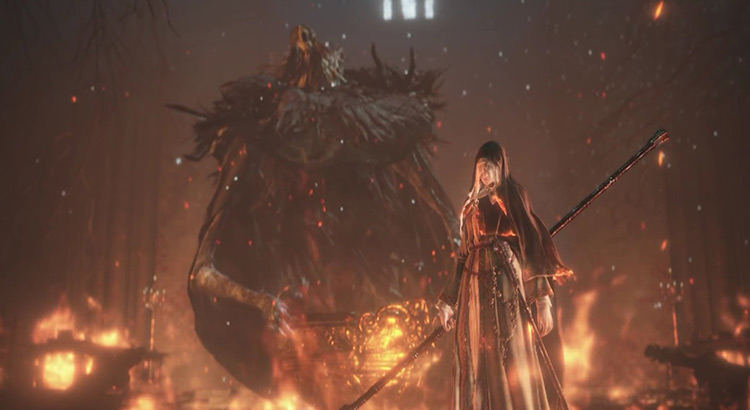 The first of many CSD patterns that make up the bulk of our best submissions.

Sister Frieda has the same style and sensibility as Lady Mary from Bloodborne and exudes the same bad-girl vibe.

It’s a relentless three-stage challenge on the edge of a colorful world, and there’s even a double final boss fight in the second stage when he’s joined by Father Ariandel, who breathes fire.

In her final position, the Black Flame phase, she uses some terrifying attacks – spinning in mid-air with a crown of flames and making insane combos that destroy your health bar.

4. King without a name 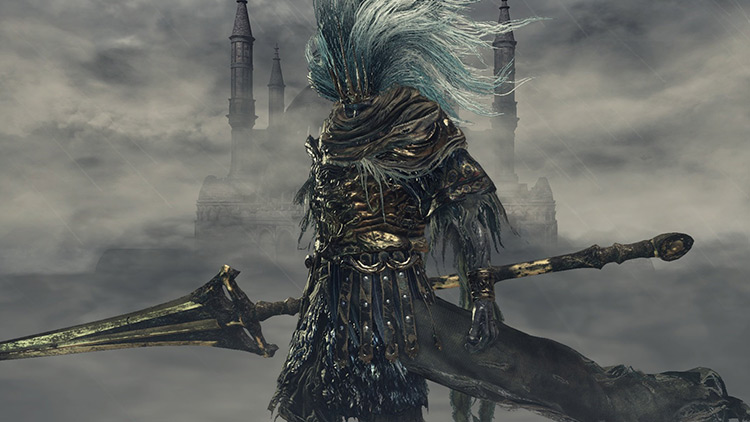 The Unnamed King is our only non-DLC final boss to make it into the top five.

And with good reason: his problems are notorious.

If you’re like me, the first thing you do is wonder what all the fuss is about. But then the real battle begins.

His calm demeanor in war will make you tremble when facing him, as he will calmly approach before launching incredibly fast and brutal attacks that will devastate any unprepared fighter.

It’s his slow and methodical approach that makes you hesitate to attack, because he can (and will) very quickly turn the tide on the right if you think you have the advantage.

3. Demon in pain and demon below (Prince of Demons) 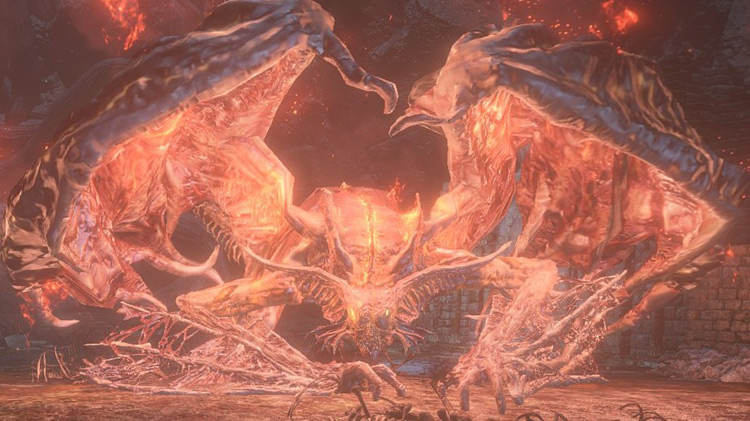 There are a criminally small number of people who fought this boss – he absolutely destroyed me.

The Demon Prince, a two-stage final boss, begins with a double fight and then transitions into a single fight.

In Phase 1, you are alternately attacked by two different demons, one of which uses extremely nasty poison moves and the other aggressive fire claw attacks.

And then, just when you think you’ve succeeded, there’s a fight. Then the explosion. And then there’s the new (full!) HP bar, the Demon Prince.

This is where it gets serious. The prince will use insane pyromantic attacks to flatten heaven and earth while destroying your hopes and dreams.

Your only chance is to get through phase 1 with adequate recovery, otherwise you are on your own.

Or just summon spirits, that works too …. 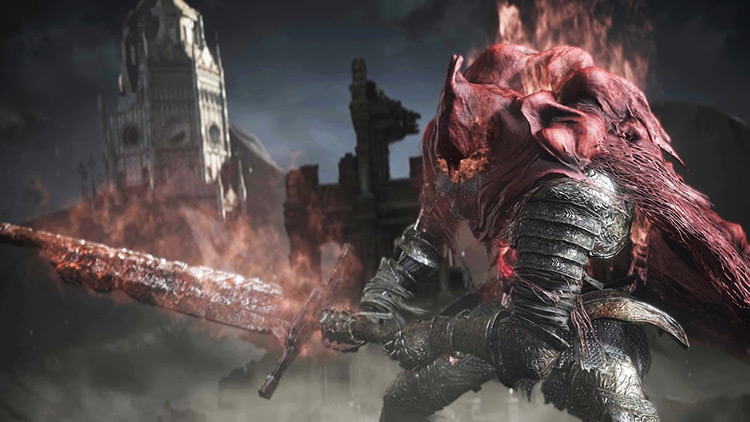 The last boss of Ringstadt and my favorite boss of all time – period.

Gael himself has absorbed a dark soul and has some steps to take. It’s brutally difficult and will repeatedly take away your health bar, often forcing you to leave Estus for the second stage.

But this is the third stage where everything gets hot.

There are so many things that make your head spin – between lightning and black magic bullets and machine gun crossbows (?) and Gael himself with his OP damage combos.

It’s incredibly fun and it’s a great reward to finally beat him.

No one was prepared for this.

Midir is, in my opinion, the hardest boss in the soul game.

Honestly, it’s just depressing and it forces you to play alone, which depresses a lot of players. There’s no easy way to beat him unless you’re right in front of him.

He will continue to destroy as he flies around the arena in a rain of hellfire, and all you can do is weakly slash at his massive pool of HP.

Patience is the key. Don’t get greedy. It can take a full hour to give 2 or 3 punches at a time, but the sense of accomplishment you get when you do it is worth it.